AeroLab’s high-speed data acquisition and a data processing provides unparalleled accuracy, enabling athletes and engineers to gain a better understanding of the environmental conditions and their influence on aerodynamics.

A question of fit

Back in the middle of June I had a brief exchange with one of our Kú Cycle authorised fitters, coach Jo Spindler.

Jo was an early adopter of the Kú TF1 and has been riding his Saint Tri coloured bike since early March when he took it to Russia,

We’ve discussed a few developments but the idea to look at the effect of the angle change for his extensions raised an interesting possibility to quickly evaluate the pros and cons scientifically.

About the same time Jo was braving the conditions in Russia on his Kú TF1 we were back at our headquarters in Almere working with Jon Wiggins from AeroLab. We were evaluating the AeroLab sensors capabilities to give us accurate aerodynamic data obtained from real world testing.
We wanted to see if we could gather enough reliable aero data to finalise the design of our hydration and storage concept, and we wanted to see if the AeroLab sensor was the tool to do that.

In summary the results looked good but raised a few questions about the performance of the bike in the high crosswinds we experienced during the test. Suffice to say those questions were of the; ‘can it really be that good?’ variety, so we were pleased to be able to persuade Jon and AeroLab to support a second set of tests in early May.

The May tests supported to large degree the crosswind, ‘sail effect’ of the Kú TF1 that we had seen in March. More significantly at that time they also allowed us to prove the aero concept behind our hydration and storage solution.
Those early test result were enough to convince us that the AeroLab sensor would be an invaluable addition to our development tool arsenal and we acquired one from AeroLab for our in house testing.
Some real world testing to answer a real world question:

Coming back to Jo’s question on what would be the effect on his performance of switching from 10° extensions to 5° the answer was let’s try it!
This weekend Jo was going to be in town to help with the build of the second of four Saint Tri Kú TF1’s

It was a great opportunity to give a first run out to our newly acquired AeroLab sensor. 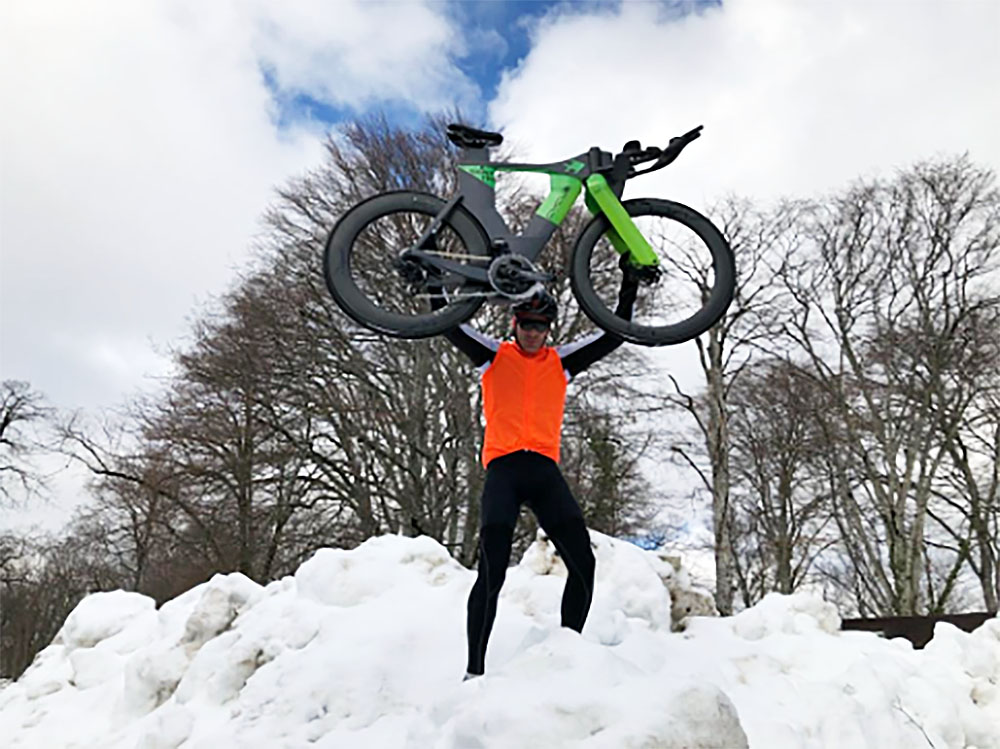 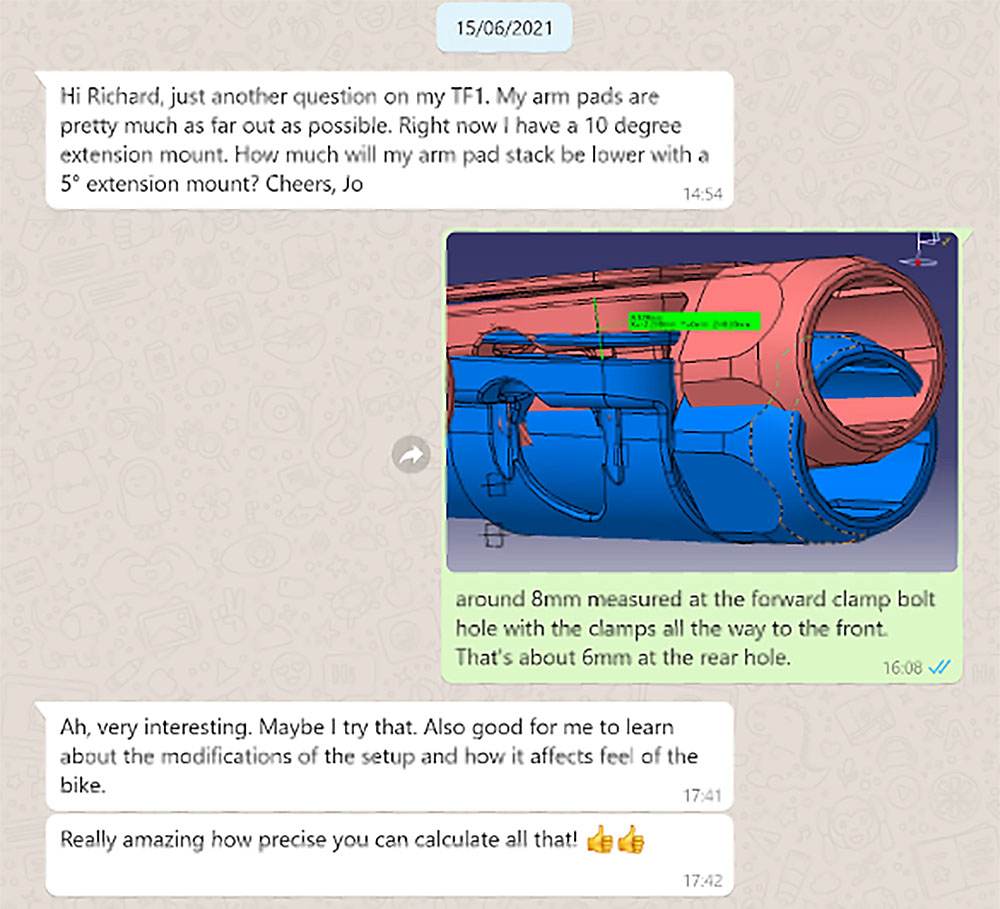 Aerodynamic Testing with the Aerolab Sensor.

AeroLab’s high-speed data acquisition and data processing provides unparalleled accuracy, enabling athletes and engineers to gain a better understanding of the environmental conditions and their influence on aerodynamics.

AeroLab technology processes over 5000 points every second in order to provide real-time measurements of: 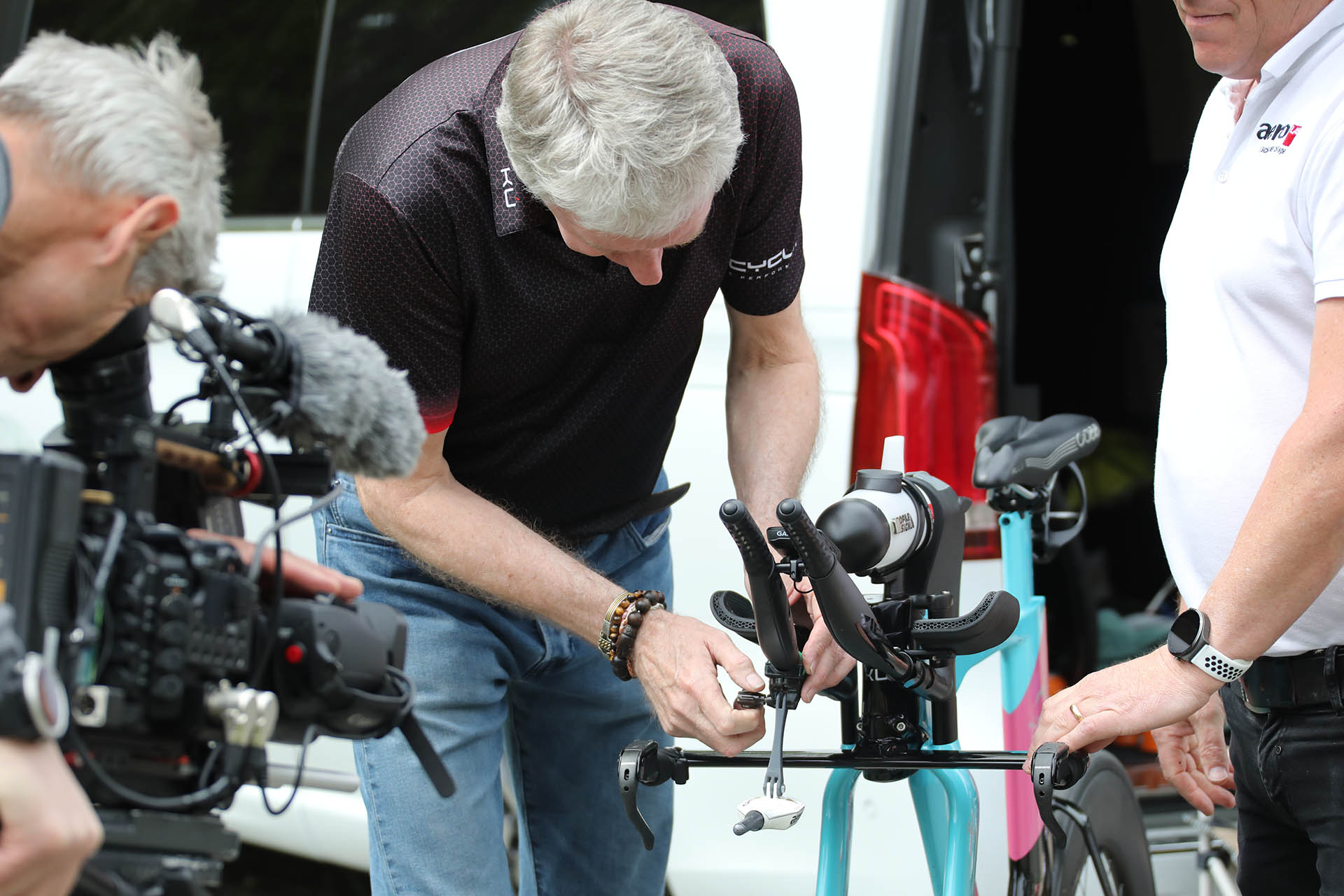 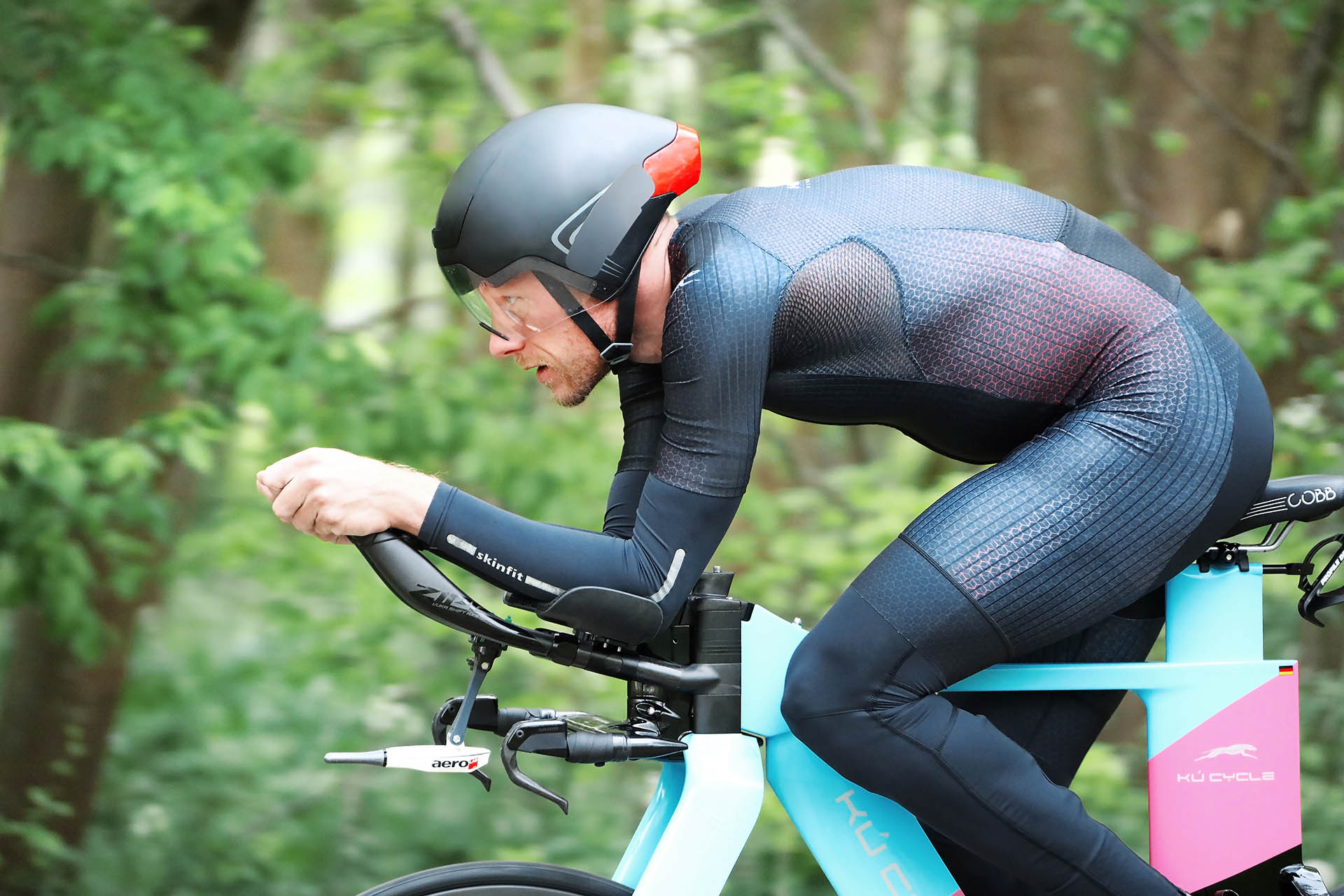 Turn around zones at each end

Our testing in March and May lead us to adopt two preferred locations, one, along the coastal dyke, is very exposed to cross winds and is great for capitalising on the AeroLab sensors capability to measure wind yaw allowing rider position and equipment changes to be evaluated in crosswind conditions.
The second location is more sheltered and ideal for initial evaluation of small changes in very stable conditions.

To test the change from 10° to 5° extensions Jo wanted to investigate we selected the sheltered inland test site.  We set up for an 800m test lap, 400m out and 400m back.

After performing three trial runs to make sure the complex system of AeroLab sensor, power meter, wheel speed sensor, Garmin computer and iPad (and human operator!) were all communicating correctly we sent Jo out for the first of three test runs.

The summary output from the AeroLab can be seen below: 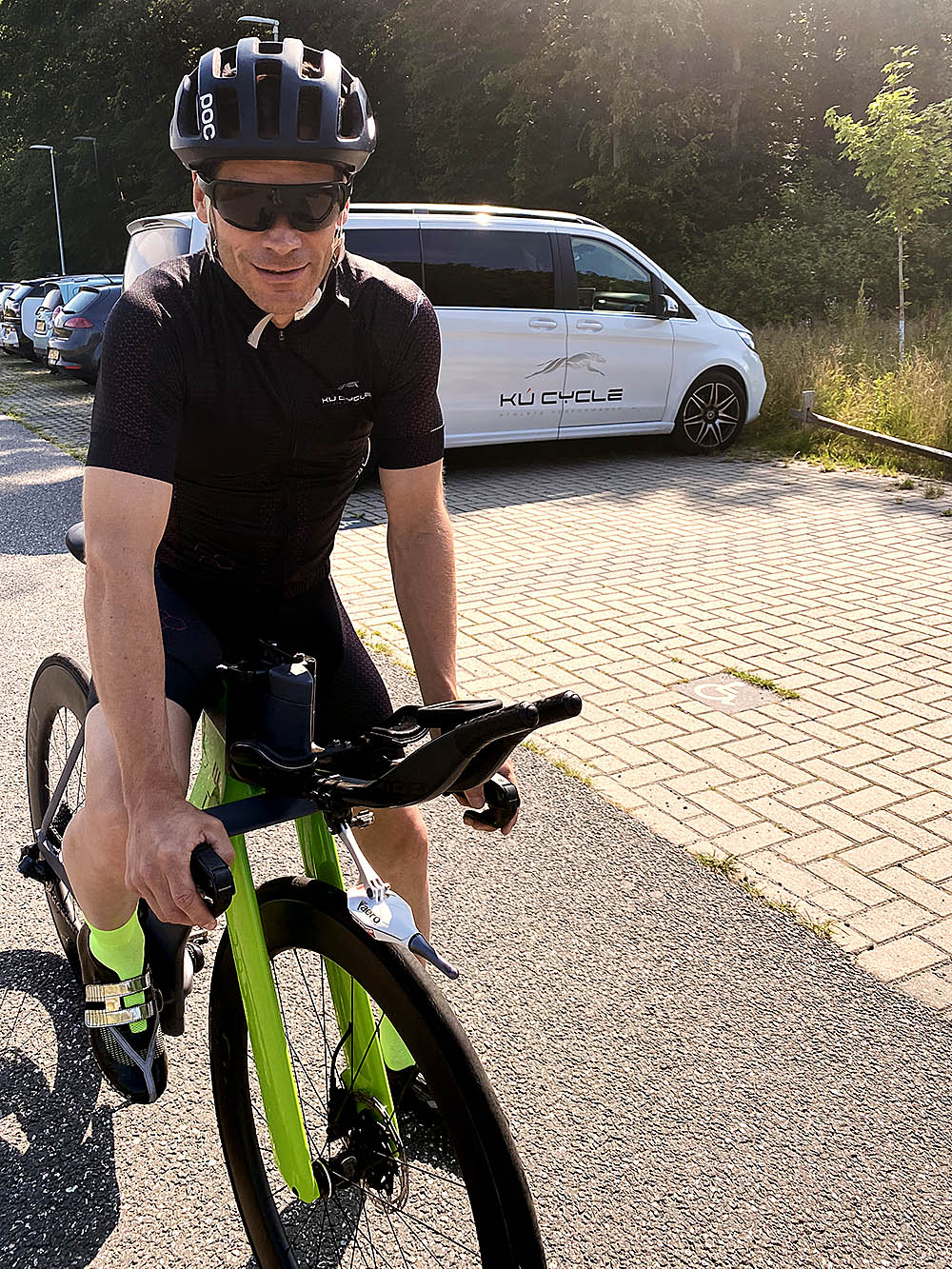 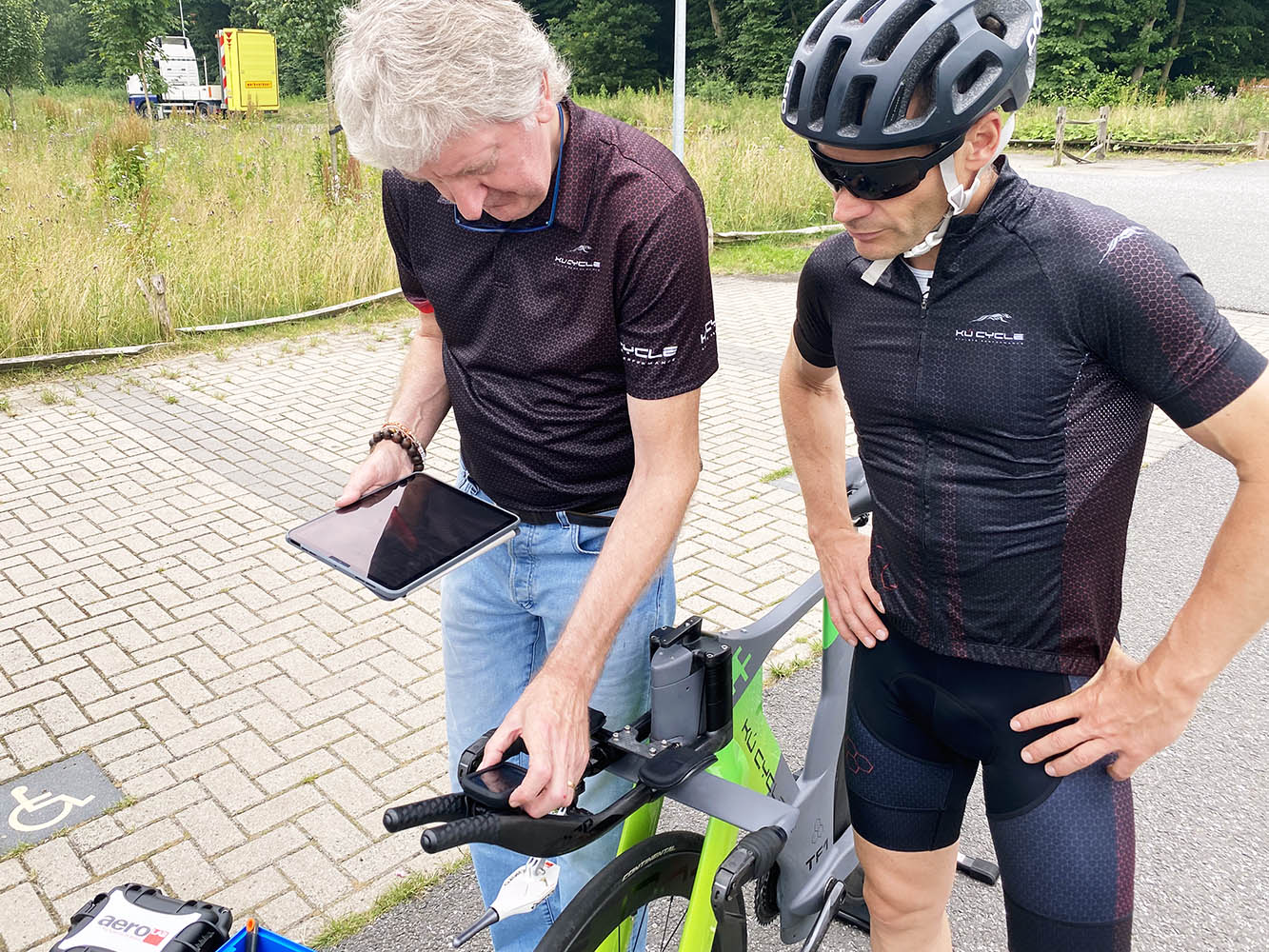 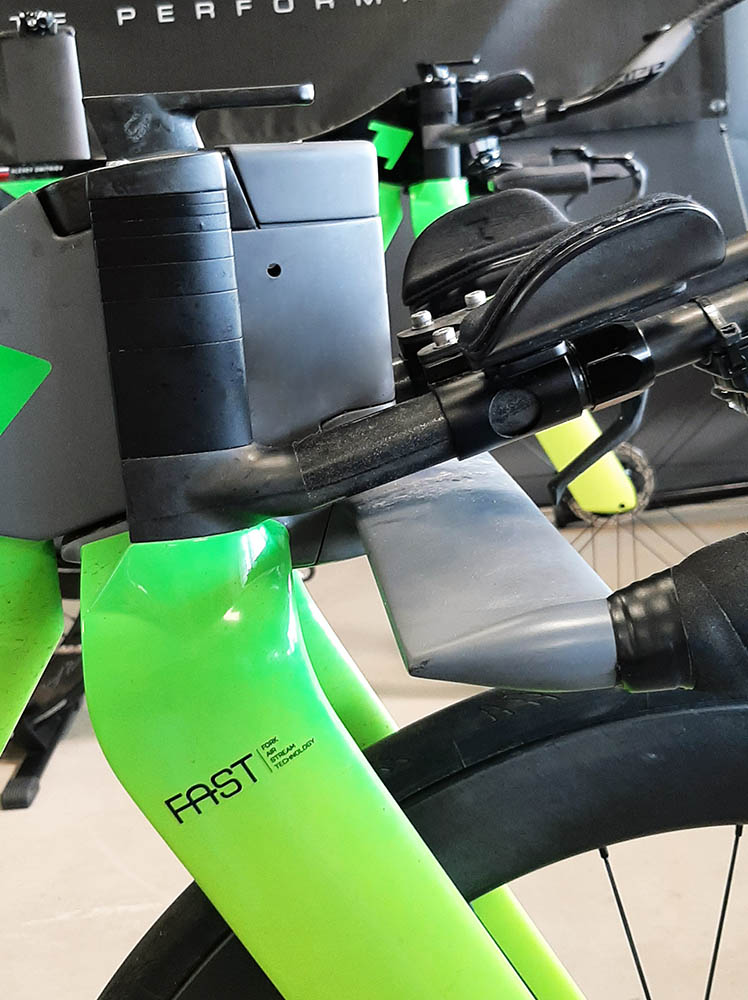 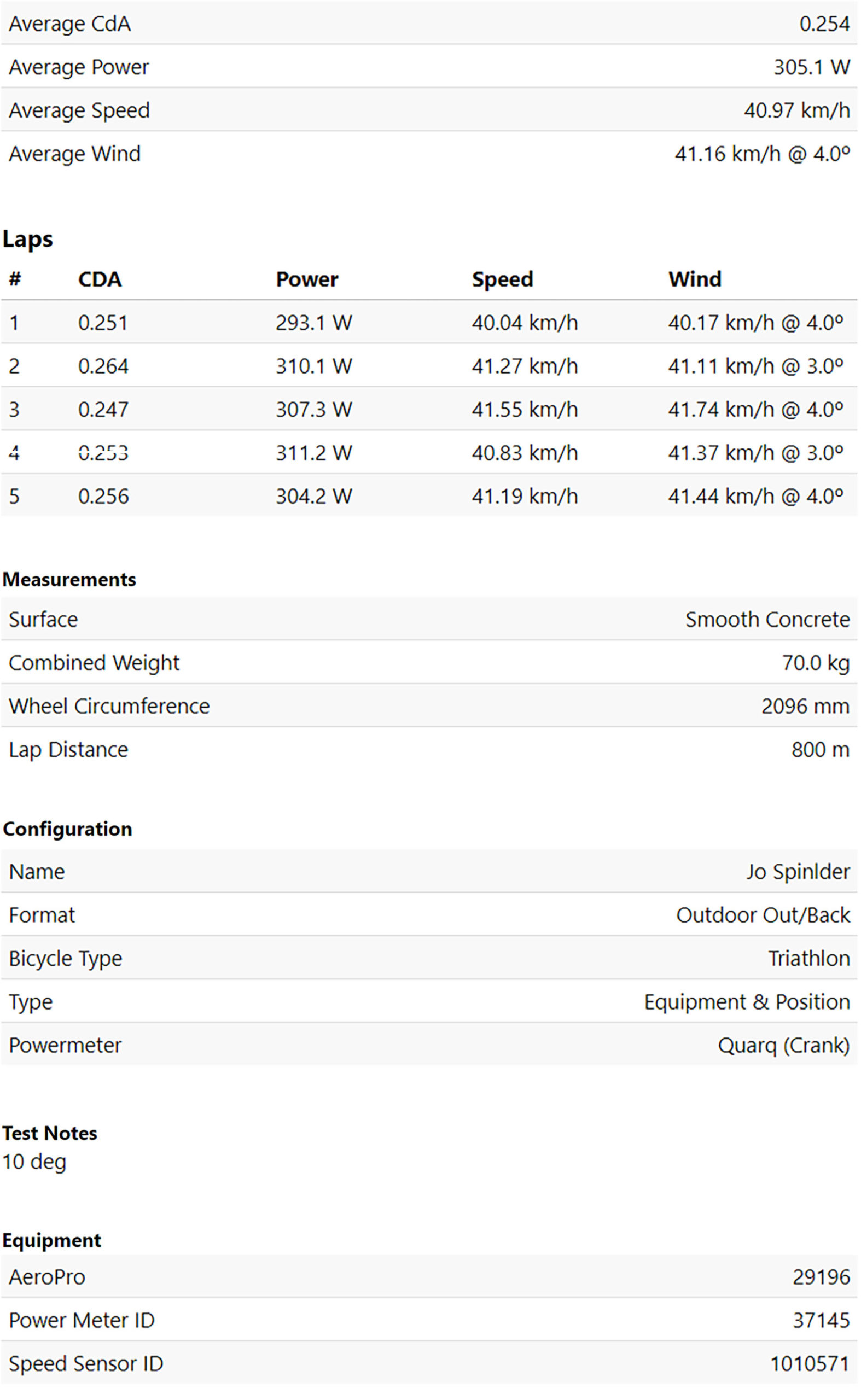 We then swapped the 10°extension unit for an identical set up with 5° extensions, effectively lowering Jo’s position by the 6mm at the back edge of his armrest cup we saw from the CAD model of the set up.

Jo’s second run was 7 laps on the 5° extensions. Jo rides his Kú TF1 long and low!

After another quick swap of the extension units, replacing the 5° unit with the 10° we went back to Jo’s original position and sent him out for another 5 laps run. 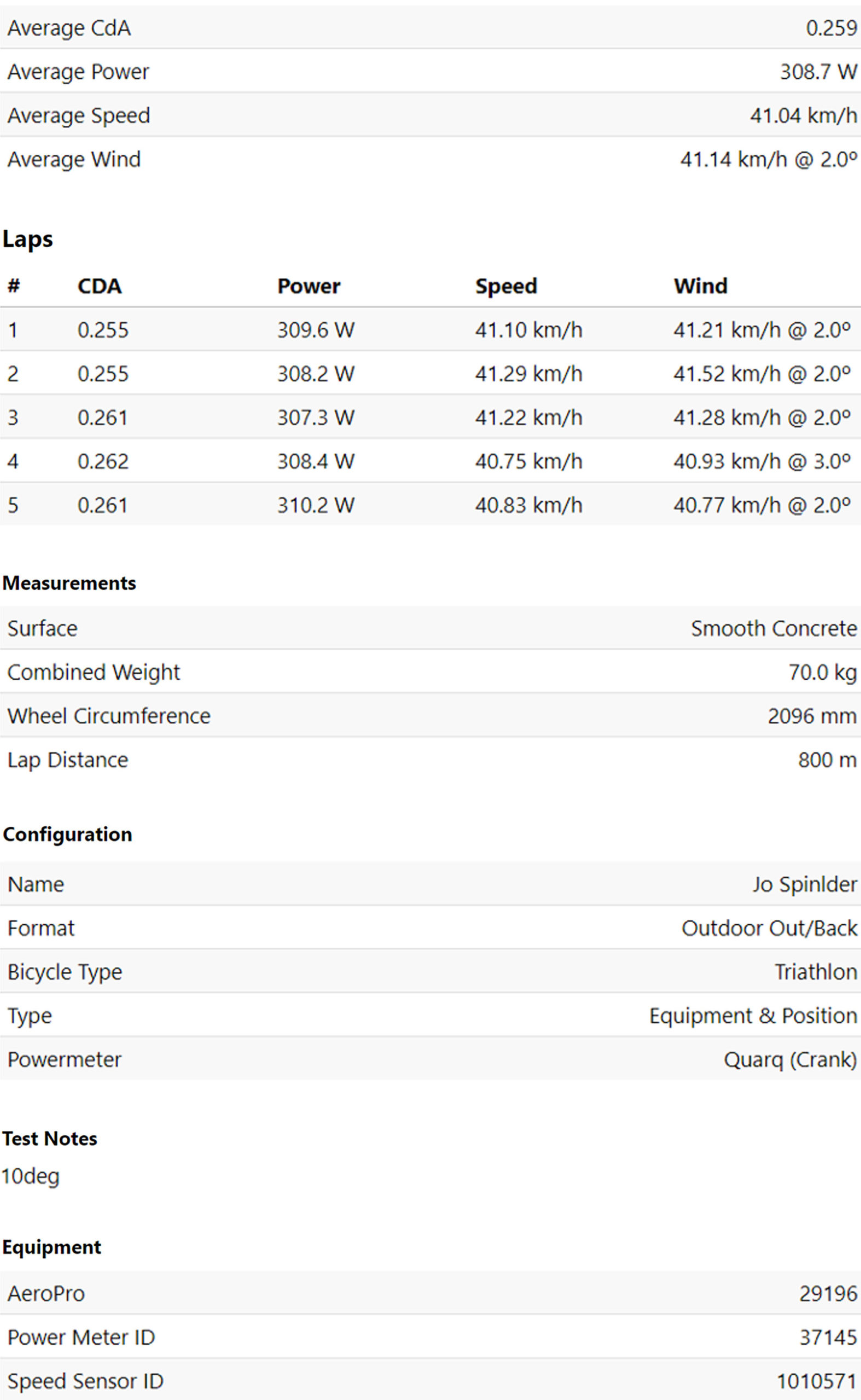 The aim of the test was to perform an initial investigation of the effect of lowering the extension angle from 10° to 5°.
Three runs were completed, two sets of five laps at 10° either side of a single set of 7 laps at 5°.

This is not a sufficiently large test sample to draw any meaningful conclusions beyond the trends seen in the results. More testing would be required to increase the sample size across wider test conditions.

However Jo proved to be an incredible test pilot with an uncanny ability to remain in position and at consistent power through out all the runs. This gives us great confidence in the numbers from the three runs we were able to record.

1. If we consider the ‘headline’ CdA we see that both 10° extension runs were higher than with the 5°

2. The 5° run and second 10°run were performed in near identical conditions.

4. The first 10° run had a higher wind yaw angle, 4° compared to 2° for the final 10° run. This is interesting to note as in all our real world testing with the AeroLab to date we have consistently seen reductions in CdA of the TF1 with increasing yaw.

5. We cannot see from the above data if at 4° wind yaw we would have seen a similar drop in CdA for the 5° extensions.

6. In addition to aero data the extended runs, of at least 4Km in real conditions, allowed a realistic appraisal of the relative comfort of the two positions that would not be possible testing in a wind tunnel where the rider has to hold a fixed position, with the bike also rigidly fixed, for the limited time of each test.

As stated above we need to repeat these tests across a wider set of conditions.
To be continued…

About Kú Cycle
A Dutch based company with a mission to design bikes and performance solutions that will change the sport forever – the perfect fit between body and machine. We believe a rider’s position should be established independent of the bike and will therefore reposition bike fitting services from a post-purchase service to a pre-purchase service. A new production process (built-to-order) and a completely different sales model are introduced with a single objective: athlete performance delivered!

Awesome ! Are you planning to come to India ?